A retired couple from Kajaani wanted an accessible single-family home for their retirement days in the centre of town. The small historical town of Kajaani is the most populous in the Kainuu region of Finland, over 550km north of Helsinki. Kajaani was founded in the 17th century when it was an important town for the pine tar industry, pine tar was used widely as a wood sealant for maritime and building construction. Still today the local economy revolves around trees; the sawmill, lumber and paper industries. The name Villa Tervas is also a nod to the past, as Tervas is the fatwood from the heartwood of pine trees that is used to light fires, and evokes feelings of warmth, the scent of wood and a sense of history.

Fittingly, the clients’ initial vision for their new home was of a timber house on a single level, with plenty of timber used both inside and out. They also had the skill and will to participate in the building process, although they were not professionals.

A suitable site was found in the centre of Kajaani, but it was a street corner, and the town plan demanded a higher building and much more volume than was needed. The zoning issue was resolved by placing the building at the corner of the site while leaving the northern part available for possible future development. The demand for the high roof gave the house a frame bigger than its functional size and created an attic with ample space for guests. The beautiful stairs are crafted by the client, and for future projects, there is a workshop at the end of the garden beside the garage.

The building’s orientation responds to its position within the townscape. The main entrance creates a joint at the corner of the streets. The pitched ceiling of the living room frames the Kainuunkatu street, while the other wing with a bedroom, study, sauna, and attic space faces Vuorikatu street. On the northern side, the courtyard is enclosed by the garage and workshop. By car you enter the site from Kainuunkatu where a walkway with a high canopy leads to the entrance, this canopy also protects the glass wall of the living room from direct sunlight. The courtyard opens to the west where there was an opportunity to retain some tall pines.

Timber is used throughout; from the timber frame construction to the facades and inner surfaces which are lined from rough planed boards or birch plywood. Many of the materials have their own history and stories of reuse. The fireplace and chimney are made of recycled bricks and the fixed oak windows and the stairs, as well as part of the furniture are made by the client. The natural stone surfaces of the garden mainly use stone from the site. 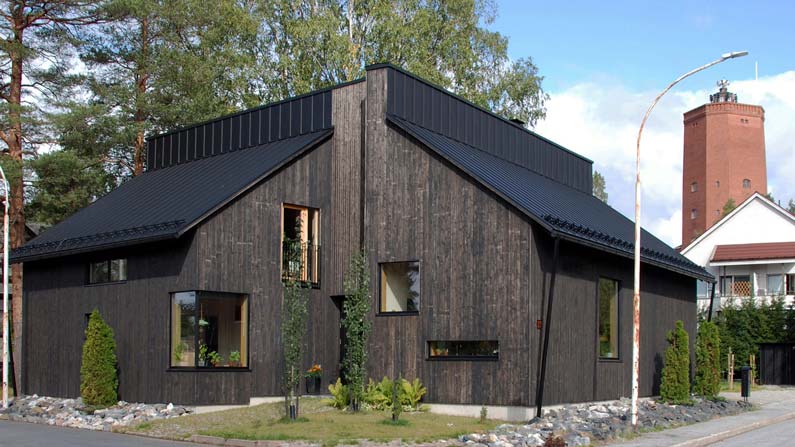